It’s not easy being a Virgo. For starters,  you are either the very youngest or the very oldest in the school year, and it scars you for life either way. Secondly, everyone in the world except other Virgos fall so far below your exacting standards, it’s hard to like them. Thirdly, you never get a decent birthday party because everyone is either still on holiday or just got back and has forgotten about your big day.

But the worst thing about being a Virgo is the self imposed rule that you must be Perfect. All. The. Time.

Failure is not an option.

This applies to work, relationships, home maintenance, alphabetising of DVDs/CDs, wardrobe organisation, spice racks, cushions sofas, picture straightening, to-do lists, pet care, parenting, exercising, holding parties, dressing oneself, and anything else you can think of. Unless you can do it fastest, best, first, most, longest – don’t do it at all.

Of late, I have been a terrible traitor to the cause. I have attended at least two social occasions with a hole in my tights and no manicure. The cous cous in the cupboard is in tupperware without a label.  There are three different piles of filing that need to be done and I haven’t posted my March birthday cards off yet. A lightbulb is out in the living room and the new sofa is sitting off-centre to the rug. In general, the house has been left to its own devices due to a couple of disastrous, time poor months on my part, and the disorganisation is beginning to show. But my Virgoan hackles are up, spying offending pockets of chaos which I am slowly eradicating over a series of late nights when my husband is away so he is not subjected to my anally retentive tidying activities. I have boxed my son’s old clothes in size order (with price lists) ready for a baby sale. The playroom has had a reshuffle and there is now a strict door policy in place regarding the useless bits of junk my son and husband think a)might be fun to play with, b) will come in handy one day c) should be placed on the shelf because the bin was too far to walk to. I have organised the suitcases so they fit in order of size into the under-stairs cupboard. I have reinstated my shoe wardrobe, which fell by the wayside a few years back when for some reason I felt my t-shirts needed the space. A couple of midnight shifts and the result is shoetopia, complete with photos of each pair to assist with search and selection. You would have got a photo but I haven’t finished colour coordinating the boxes yet.

But everyone, even a Virgo, needs a place of respite. Somewhere where the pressure for straight lines, right angles and colour coordination isn’t so intense, where we can release our inner slob and let it all hang out. You might be fooled into thinking it’s my study, but this is just a room I haven’t got to yet. No, the study is a controlled environment that will take a limited amount of time to put to rights. The real nugget, the secret dust magnet, the water bottle harbouring, crisp packet festering, Virgoan underworld is… my car.

Keeping my car clean has never been a strong point. My first car, an x-reg Mini, was probably the cleanest car I ever had, because there wasn’t enough real estate inside to sustain much in the way of a trash ecosystem. The Astra that took me through my college years, on the other hand, was a pit, the very model of a student car. If you were lucky enough to get a lift, you first had to tackle the EU mountain of empty fag packets that littered the rear footwells (thanks, friends) before possibly being attacked by any number of cassette tapes, essay papers and old McDonalds takeout. The person who stole it and wrote it off in Lewisham car park c. 1996 probably died of toxic shock. Serves them right. Pick a tidy car next time, suckers.

In the late 90s, my car reflected the vaguely chaotic state of my early twenties. I had a couple of flirtations with Ford Fiestas, where the back seat was reserved for sleeping bags, spare knickers, a toolkit and a picnic blanket, various phone chargers and any number of items that ended up in there when I moved house for the 142nd time and never took them inside. Two KAs and another Mini later, and the evidence of wedding event organisation began to pile up in the rubble whilst the boot was handed over to recycled shopping bags and a yoga mat in case of emergencies.

Finally, twenty three years on, I have reached the pinnacle of my car ownership in the form of a RAV4. It is the place where mess goes to die. I offer you a peek into my undercover life as a slob…if you look hard enough you’ll see the yoga mat is still there, just in case.

The back seat and boot of the car, otherwise known as the Kingdom of Lost Things

The passenger footwell. Yes that is an old band aid. 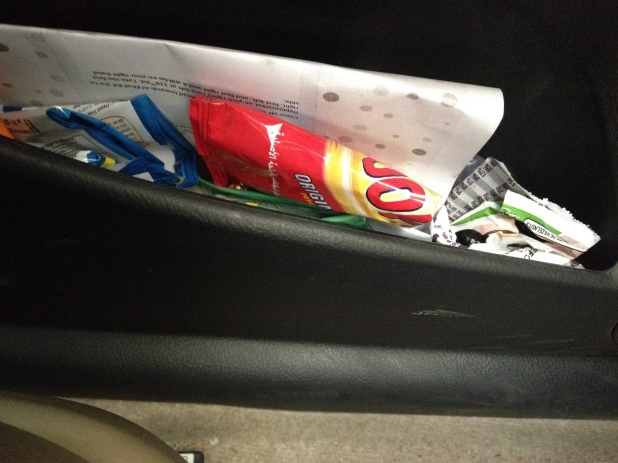 Evidence of my many post-supermarket trip ‘treats’, tucked neatly into the side pocket of the driver’s side.

And a broken umbrella and activity book, just in case my passenger needs some light entertainment, or very poor shelter from ‘all’ the rain.